Villa Del Monte Hosts Exciting Shuffleboard Action –
by Dean Grattidge    District 7 Reporter
As 52 players took to the courts in the annual CSA Lee Christmas Memorial Tournament, the outcome of several contests was not determined until the last frame in many of the games. This was an Any Singles tournament.
Personnel was on hand to assure success in every aspect of the competition. Lynda Goggin, ATM, had command of the flow of the event plus the creation of and upgrading of the charts. Carol Anderson took on the assistant’s job, her first try at it. Head ref was George Hayner as Karla Winget ministered to the scorekeeping.
Frank Carchedi was ever-present as club president and supervisor of the games. I sought him out for a brief history of the Villa del Monte venue. We were much more fortunate on this date (June 1-3) than in 1980 when there was an incursion of water onto the shuffleboard courts, due to a breach in the San Jacinto River flood control levee. Now, control by the Bautista Flood Control Aqueduct has since alleviated the problem.
The boards were kept in top shape due to the efforts of Paul Epps, David Miller, Ann Cantu and Jerry White. The VDM kitchen crew went out of their way to provide “tantalizing sandwich selections” for 3 days. There were abundant ham- salad, chicken salad, egg salad plus hamburger/cheese-burgers and other amenities. (The pies were great!)
Contributions in cash and prizes were obtained from Polly’s Pies, Red Robin, Rachel’s Beauty Shop and the never-ending donation from The Bank of Hemet. We thank them all for that.
There they were, the top contenders gaining confidence with every shot, so, after receiving their pins and cash awards, the winners qualified to have their names printed in the Archives of the Lee Christmas Memorial Tournament. The Championship winner will have her name etched on the tournament plaque along with 2 former-year winners.
In the Championship bracket are these 4 winners: 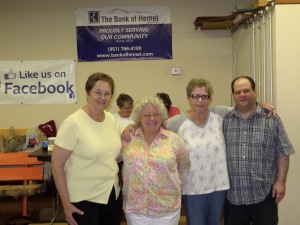 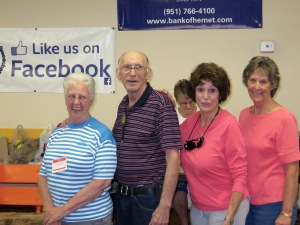