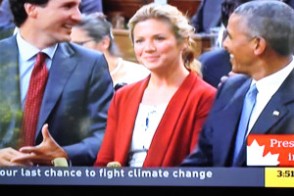 July 1st and July 4th are Rapidly Approaching!!  I Offer these Remarks as My Contribution to both Very Special Days!!

To-day, 2016 06 29, President Barack Obama gave an address to the Parliament of Canada.   To say that he was greeted warmly is a gross understatement!!  He was greeted with endearing enthusiasm!!  Although you might find someone who (repeat, might) take issue with content, NO ONE COULD TAKE ISSUE WITH THE EFFECTIVENESS of his DELIVERY!!   The House spent as much time on their feet clapping as they did in their seats!!! 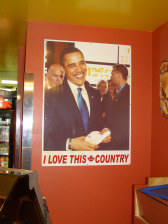 He reminded “Justin” (our PM > Prime Minister) that he too had black hair when he took office almost 8 years ago!!  He paid tribute to Gordie Howe!!  He reminded us that Canada was the first country he had visited on taking office and referenced his visit to the By Town Market in Ottawa almost 8 years ago.    (This is a pic which continues to…

Following there, and here, keep Shuffleboard in the forefront of search engines. Hope your summer is the best!

by Dean Grattidge  District 7 Reporter. June 13-15, 64 enthusiastic players vied for a win. The inception of this event (Bonspiel, meaning “Good Game”) was conceived 21 years ago by Marty Boyajian. He still checks on the progress of this tournament. Many volunteers helped to “jump start it” and keep it moving forward.
ATM’s Carol Anderson and Sharyn DiChiro assembled the charts and match-ups and kept the data current for all 3 days. Carol, the club president, was head ref for the event. Facilitating all this activity was indeed a daunting task, and we commend them for their effort and expertise. Karla Winget was head scorekeeper, collecting and certifying all score cards. Kerry Selway did a fine job keeping the boards prepared and reliable. He was assisted by Bob Hackett, George Hayner and Jerry White.
Players had to embrace some special rules, such as, no practice shots and discarding of the kitchen penalty. (How do you spell “relief”?)
Each player was “bracketed” according to their performance in the first two (Monday’s) games: Win the first two, go to Red Division, Win first and lose second, Blue, Lose first and win second, Green, and lose first two, Purple Division.
Hemet Muni members held the priority of first choice in placement on the roster; participants from adjoining clubs were then invited to enter.
Four games of 12 frames were played each day, giving all contestants two game a day. No one was eliminated.
Entry fee was only $10.00. For a fee of $$5.00, a nice lunch was available each day. (Final day, the cake could not be turned down!)
There were several merchants contributing gift certificates again. They were: Farmer Boy’s Restaurant, Polly’s Pies, Jack In The Box and Mike Walker, representing Dura Dress, a provider of board dressing. The Bank of Hemet presented the event with generous funding. We thank them again.
All winners, and there were 3 of them in each division, received a handsome vest and pin as their reward.
Helping to rewrite the Bonspiel record book were the following players  –
Red Division: First, Robert Brooks, second, Mike Garrett, third, Mike Walker
Blue Division: First, Ron Needham, second, Jean Estes, and third, Bob Hackett.
Green Division: First,  Warren Huffman, second, Marilyn Richmond, and third, Jerry White.
Purple Division, First, LeRoy Zerr, second, Deanna Shockley, and third, Rocky Briggs.
Once more, we commend the architect of this event, Marty Boyajian.
Please keep the next event in mind, the Emmett Allen  Memorial Singles Tournament from July 11th to 14th at Seven Hills.
Many thanks to all who helped promote and put on the Bonspiel. 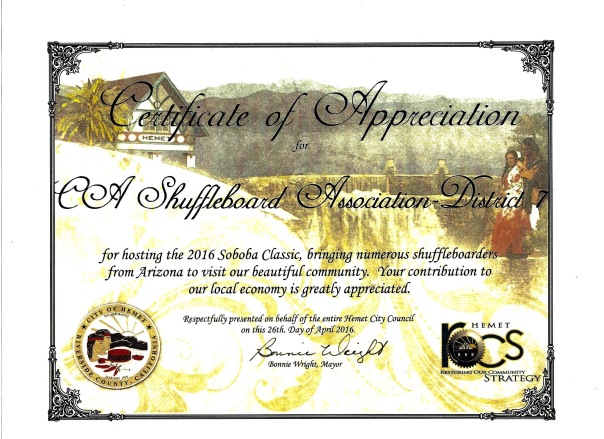 Although everything looked good when I posted the article, the pictures didn’t come through. I hope they do this time!