by Dean Grattidge   District 7 Reporter
Nice entry total: 92 partners vying for honors on the upgraded courts at Sun City. This took place from April 3rd to 5th, 2017.
Sponsors were The Bank of Hemet and The Soboba Band of Luiseno Indians. We certainly commend them for this.
ATM’s were Liz Backus and Dick Massey. Other personnel helping put this tournament together were: Dave Ruch, kitchen supervisor, (Nice lunch selection every day!), Board crew: Bob Anderson, Steve Beatty and Ray Merritt. Head referee was George Hayner and score keeper was Dennis Iszler. Thank you all for your contributions.
The 12-frame games were played under CSA rules.
The winners were –
Championship: First place, Robert Brooks (SDSE) and Chuck Crouse (Mesa AZ), This being the second National win for each of them, no pin was awarded. But they have the prestige of being multiple National winners. Second place, Jim Higgins and Del Ferris (Foothills of Hemet), third place, Bob Klingenberg (Sun City),and Val McDougall (Desert Hot Springs and fourth place, Bob Rule (SDS) and Tom Armijo (Sun City).  All winners received money awards plus  the”Sun City Cal Round pins”
Consolation bracket:
First and second place (and you may refer to this as “The Brown’s Battle) Feel free to!
First place: Johnny and Amber Brown (Hemet Muni), second place, Julian and Sharron Brown (Mountain Shadows), third place, Sharon Hillan and Ken Norris (Hemet West), and fourth place, Fran and George Hayner (Hemet Muni).
Again, all winners received money awards.
Ladies: look for the sign-up sheet for the upcoming Maxine Trachsel Memorial Tournament at Sierra Dawn Southeast
from April 17 to 20th. 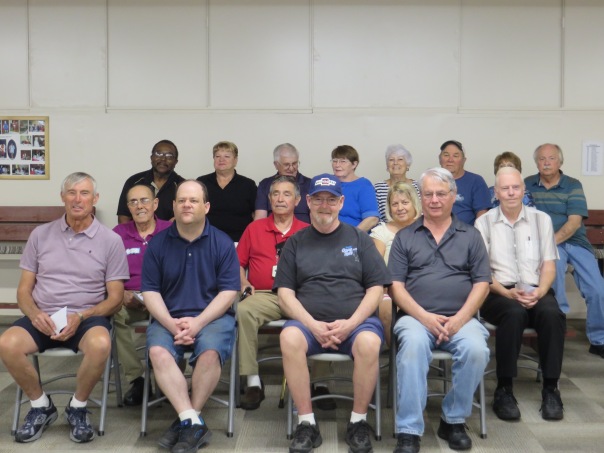 If I may borrow a quote from Dickens ‘A Tale of Two Cities’, “It was the best of times”  Seventeen teams with players from two nations vowed to uphold the legacy of that quote as they signed on for the event at four Hemet venues.  Players from Canada and the U. S. took part in this Soboba Classic:

The Classic directors for the tournament were George Hayes and Sharyn DiChiro, asst. and treasurer. Other personnel who assisted in the program were Helen Bell, program and pins, Steve Piccinonno, statistician, Michael Garrett and Tootie Chittenden, Special Projects, Nelda Lichtwald and Glenda Epps, Banquet, Rocky Raver, secretary, and Jay Davidson, CSA President. They turned in a masterful job!
The four venues and their ATM’s were: Hemet West; Bobbi McClemore, Shirley Calahan, Jan Filatoff and Lynn Cisto. Seven Hills; Donalee Allen and Mary Davis. Hemet Muni; Kerry Selway, Lorraine Donahue and Rita Deidrich. SDSE, Jan Stephens and Len Sweet.
Forgive me, please, if I miss acknowledgement of any of the personnel who made this an unparalleled event.
The major sponsor, The Soboba Band of Luiseno Indians, whose officials were on hand  were presented at luncheon. They were Sally Ortiz, President of Soboba Foundation, Geneva Mojado, Vice President, Patrick Placentia,

Treasurer. Sally distributed prizes to those who won in the drawing. 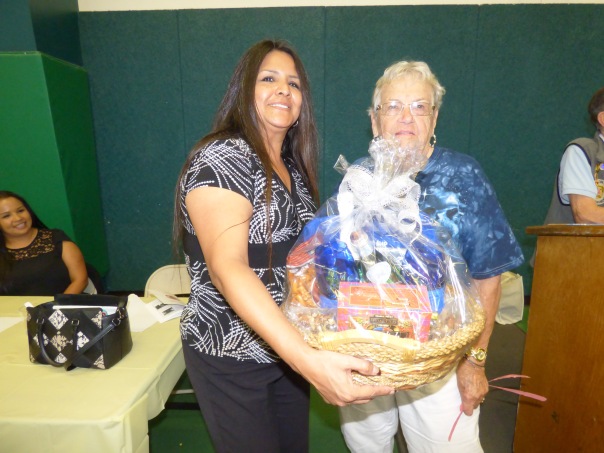 Myrna Torres and Aaron Young, Bank of Hemet officials and another long time sponsor of shuffleboard, as well as Russ Brown, City council member, City of Hemet. Mr. Brown presented District 7 with a Certificate of Appreciation on behalf of the City of Hemet.

Other sponsors included Miller Jones Mortuary and Crematory, sponsor of our annual picnic, Motel 6 on W. Florida, new this year and Travelodge on W. Florida, a returning sponsor.
All games were 12 frames and were played under CSA and special Classic rules. Teams received 1 point per win and 1/2 point for a tie. Teams also supplied the scorekeepers but players refereed their own games. Following the team roster, 8 players at a time played all of the other 16 teams once, for a total of 128 games for each team. 1st and 2nd place teams tied with 75 1/2 points each. The winner was decided by the results of the games between these two teams. Thus Del’sDozen earned the win over the Calizona Compadres.
The Classic culminated in awards luncheon Eastside Valley Wide’s Community Center.The lunch was supplied by Café DJ Catering. It included a choice of sandwiches: roast beef, tuna or turkey, with two soup selections: cabbage loaf
or clam chowder. Deserts followed: cookies or brownies.

Honored guests were Dale Monday (Calizona Compadres) recently inducted into The U. S. A. National Hall of Fame. 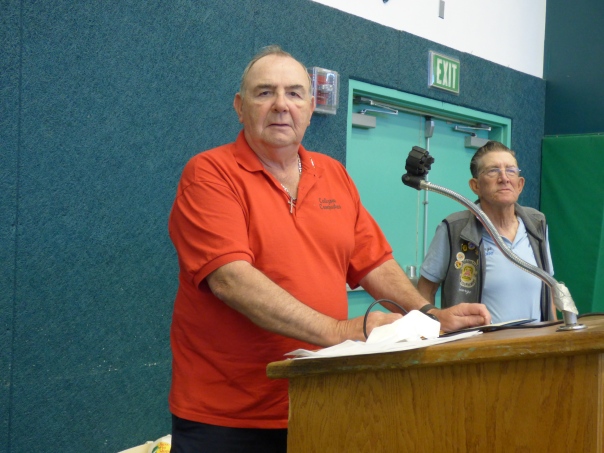 Along with USA President Robinson were 2nd VP, John Houser, Sect. Sheila Monday and Western Rep. Sylvia Smith. The full California Shuffleboard Association board were present as well as the full board of District 7.
Prevailing for first place was this team from District 4, Apache Junction, Dell’s Dozen  – their first number one title. They were presented a handsome traveling trophy and each player awarded a “Classic Vest” plus a commemorative pin. 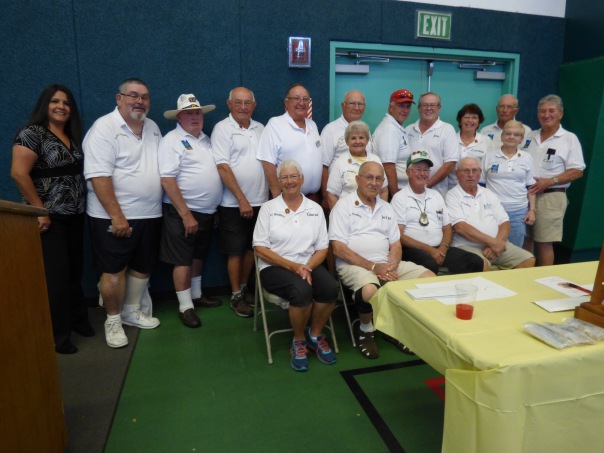