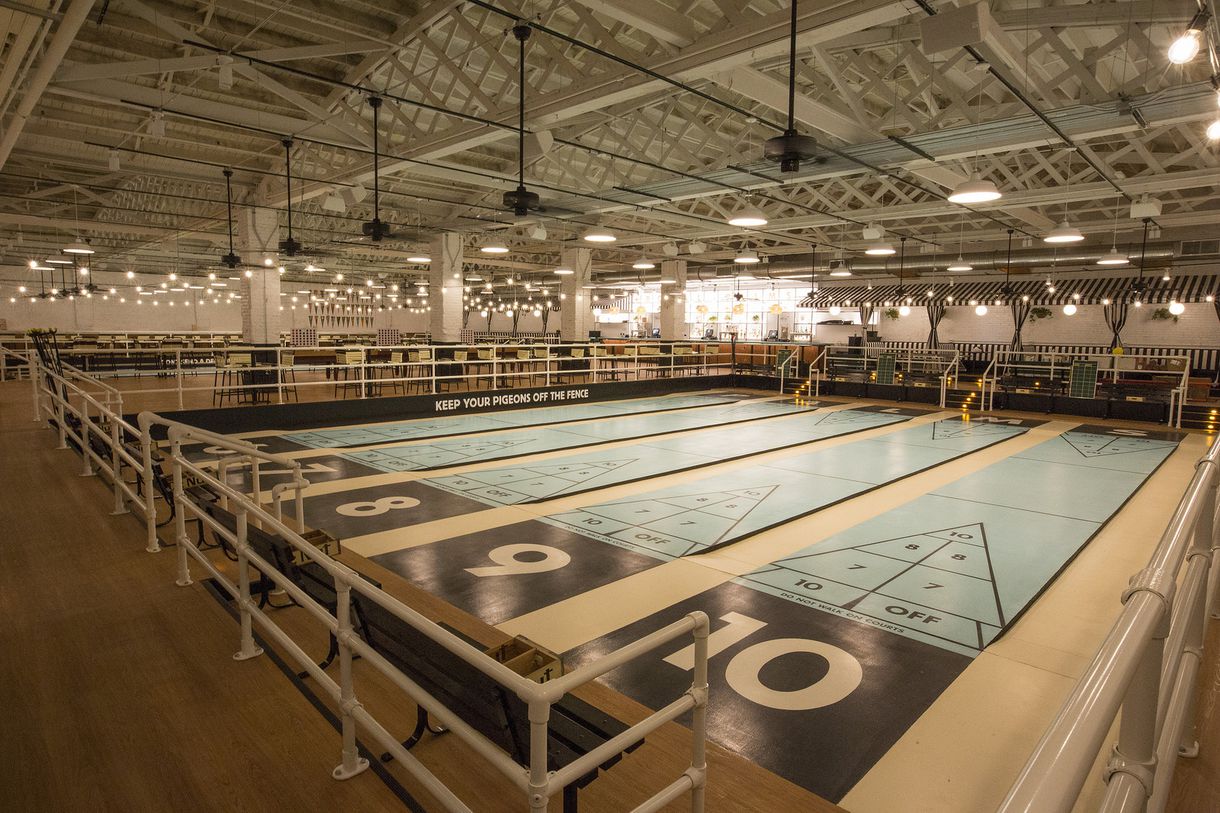 Four years after becoming a viral sensation in Brooklyn and introducing shuffleboard to a new generation, Royal Palms Shuffleboard Club opens its second location today in Chicago. Owners Jonathan Schnapp and Ashley Albert set it apart from other gaming bars and restaurants due to the uniqueness of shuffleboard, the genuine passion they have for the game, the come-as-you-vibe first in NYC and now Bucktown, and their reverence and aspiration to be like restaurant hospitality legends.
“[We’re inspired by] the idea that people can be as passionate about fun as about food or drinks,” Schnapp says.
To prime Chicagoans for their first shuffleboard club, here are 11 things to know about Royal Palms.

Royal Palms is inspired by a “magical” party Schnapp and Albert attended six years ago at a century-old shuffleboard club in St. Petersburg, Florida. They originally were “mostly kidding” about opening their own club in NYC and went…

We met in the Canyon club house. The 2 hour meeting was very productive and will result in some changes and some clarifications. They will be coming soon to a court near you.

At the March 5 – 7 Tournament of Champions hosted by Desert Crest Shuffleboard Club at Desert Hot Springs, 43 men and 25 women vied for the coveted Eagle trophies. Trophies are awarded first through fourth in both the Men’s Division and the Women’s Division. The Champion in each division also has their name engraved on the traveling trophies and receive a special TOC winner’s pin. All participants in the tournament receive a TOC participation pin with the year engraved. Many of the players have pins nearly surrounding the whole collar of their team shirts.

John & Linda Nielsen, new to managing this tournament, did a fantastic job in organizing and making sure all the players were well informed of their play times. This bittersweet tournament…. Everyone looks forward to playing in it, but it signifies the end of District 5’s season so there are a lot of “goodbyes and we hope to see you next season”.

The “snowbird” season for the CSA District 5 Hi-10 League has ended for the 2017 – 2018 season. At the CSA District 5 Hi-10 meeting held Saturday, March 3, plaques were awarded to the top 3 of the 11 teams that competed throughout the Coachella Valley/Palm Springs area.
Tramview Roadrunners – 1st place – 81 points.
Captain Bob Junk received the award from IWRV Resort Shuffleboard President, Gene Eager, in memory of deceased sponsor, Bev Rowley.