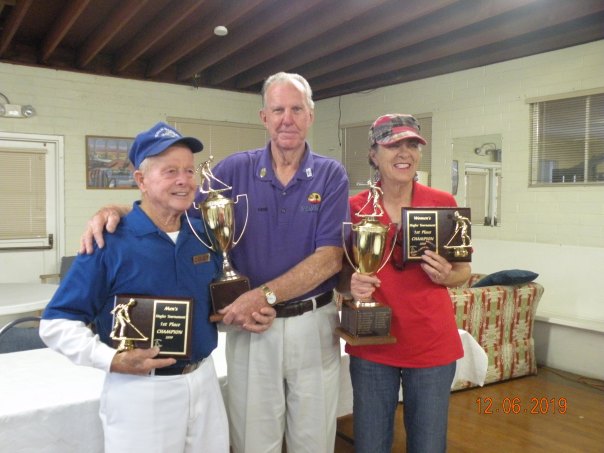 It only took 2 or 3 phone calls – 1) When District 5 President, Gene Eager, received a call from Tramview President, Shirley Gengler, stating she had bad news – there was a problem with some of the boards at Tramview and the club wasn’t going to be able to host the Singles Tournament which was scheduled to be played there in less than a month.  2) Gene immediately called Ramon Park President Jim Montague and explained the situation. Jim’s initial reaction- “I’ll meet with our club members tomorrow and see what we can do.” He and Gene chatted awhile and Jim ended the conversation by saying “I think we can do it…. I’ll say yes.”  All the club presidents were advised and the District 5 Singles Tournament was played on the 8 outdoor courts at Ramon Park in Palm Springs – well, 3 of the 4 days were played there. With a forecast of 100% chance of rain on the second day of the tournament, another phone call was made to see if the second day could be moved to Royal Palms in Cathedral City since they have a cover over their courts. “Yes”, was the answer, plus the use of their kitchen and clubhouse for lunches.

With the cooperation of these 3 clubs, 56 men and 36 women competed in the annual District 5 Singles Tournament. The last two days were played at Ramon under blue skies – quite a change from the second day when a quarter of an inch of rain fell in Palm Springs. As soon as the men from Ramon got done playing at Royal Palms, they hurried back to Ramon and started working of their boards to get them ready for the next day’s play. Between 25 to 30 gallons of water were vacuumed off of the boards and the alleys between the boards. At 9:00 Wednesday morning, the boards were ready and no one would have guessed there had been a rainstorm the day before.