by  Dean Grattidge   District 7 Reporter
Seven Hills Shuffleboard Tournament: A Commemorative for A Leader.
This singles tournament was played to honor the late Emmett Allen, past program and community leader.
From May 7 to May 9, 2018, 64 players squared off to apply their skills in this District 7 singles event. For 6 years this venue has displayed the name, Emmett Allen in honor of his dedication and service.
All these volunteers are to be commended for their fine efforts: ATM Lynda Goggin, with help from ATM Helen Noeltner, managers, Suzanne Shapiro and Mary Davis, board crew, Ron Needham, Bob Henderson and Chuck Davis. Head ref was George Hayner. Head Scorekeeper was Tootie Chittenden.
Polly Givens had gone out into the community once again, to solicit door prize certificates from the following contributors: Farmer Boys Restaurant, Stater Brothers Market and I-Hop Restaurant.
The number one community sponsor, The Bank of Hemet came forward with generous funding. (We just can’t thank them enough for that!).
A 50-50 drawing helped the host venue defray some of their expenses. Polly Givens organized this drawing.

Aaron Young, Bank of Hemet official, shown here with Lynda Goggin, Helen Noeltner, and Mary Davis, took the time and effort to come by and hand out awards to the winners. We thank him for that as we thank all the volunteers.
The best part of reporting is to acknowledge this group of eight players who competed at a high level and prevailed in their efforts.
Championship –
First place, front row l-r, Robert Brooks (SDSE) now recognized as the “Gold Standard in competition”. Second place, Ruth Schneider (SDSE)
who put on a classy challenge throughout this low scoring back-and-forth match with Robert. Third, Nadine Hackett (Hemet Muni)
and fourth place, Janet Langenmeier (also from Hemet Muni). 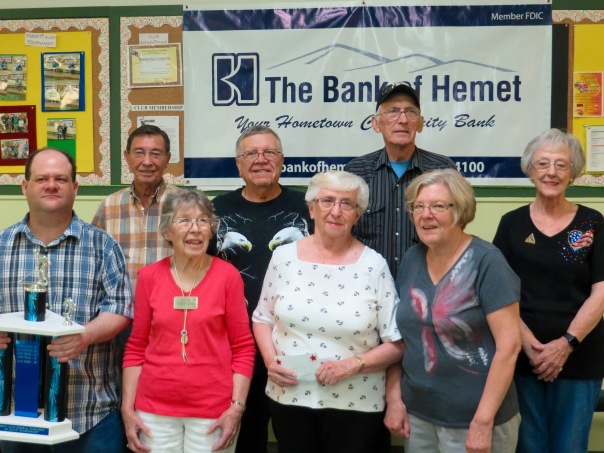 Congratulations to all winners and to all volunteers and participants who helped to evolve this into a well managed tournament.