by Dean Grattidge, District 7 Reporter.
From Aug.11-14, 72 contenders squared off in the Emmett Allen annual CSA singles tournament. You sometimes  got the Impression that he gave meaning to the term “Unsurpassed Camaraderie”.
The ATM’s were Ruby Best and Suzanne Shapiro (iheir first tournament). Mary Davis handled the announcing chores. Sharyn DiChiro, District 7 Tournament Manager, was on hand to assist the first time ATM’s who take multi-tasking to a new art form, having to create  charts, pairings and scheduling; then keep the charts upgraded throughout the event.
Head scorekeeper was the lovely Karla Winget, who collated and certified all entries on the cards. The not quite as lovely Head ref was George Hayner, who earned credit for seeing that no game was played without a referee.
The (no comment) board crew of Ron Needham, Chuck Davis and Everrett Harbison took care of board maintenance. The boards were fairly speedy and for the most part consistent. Of course their were the usual 7 Hills surprises where the disc went into the kitchen and then backed out into a 7. Or seemed to stop for a score and then back onto a line. As Hall of Famer, Rocky Briggs was heard to say following one of these occurances, “I love this game!”Seven Hills president Suzanne Shapiro was continuously on hand as venue facilitator. Jerry Stutes and Donalee Allen worked tirelessly to bring in door prizes from: Walmart-Hemet,  Milano’s Pizza, Farmer Boy’s Restaurant, IHop, Stater Brothers, La Fogata Mexican Restaurant, Arturo’s Mexican Restaurant, Red Robin Restaurant and
Hungry Bear Restaurant.
Polly English orchestrated a 50-50 drawing where one winner went away with a huge smile as the club gained a nice profit from their half of the drawing.
The Bank of Hemet again, so generously funded prize money for all winners. We just can’t thank them enough! Thank you Myrna Torres.
For lunches, D.J.’s Café brought the daily selections of hot dogs, hamburgers or cheeseburgers, plus the side dishes.
All games were regulation 12-frame.
So, into the record books go this group of contestants who carved out their own niche in the shuffleboard archives –
Each receiving a pin and cash award for their efforts.
Championship:
First, Robert Brooks (continuing his tradition of wins), Robert took home the  “traveling trophy” ’til the tourney starts next year. 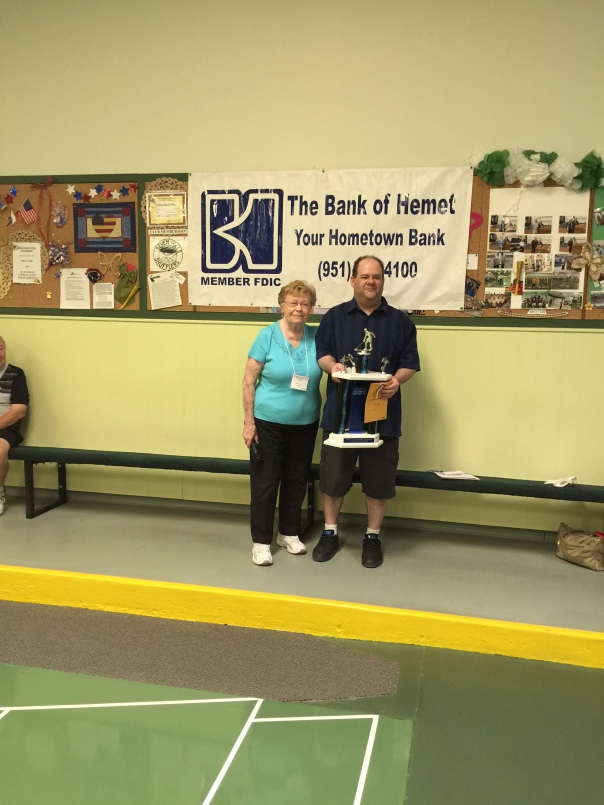 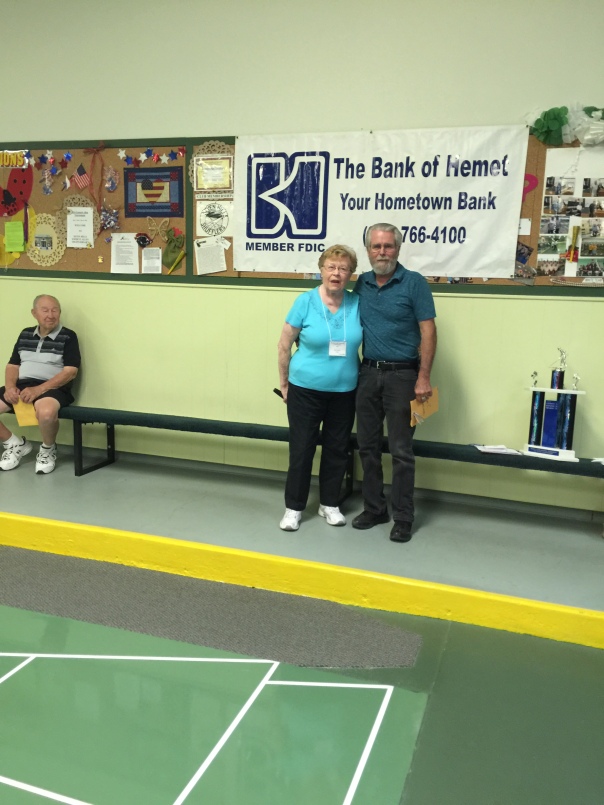 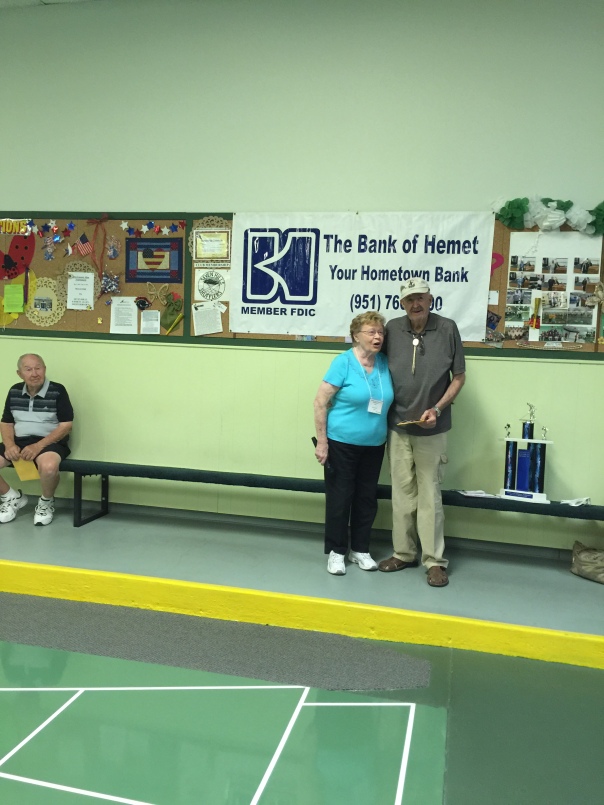 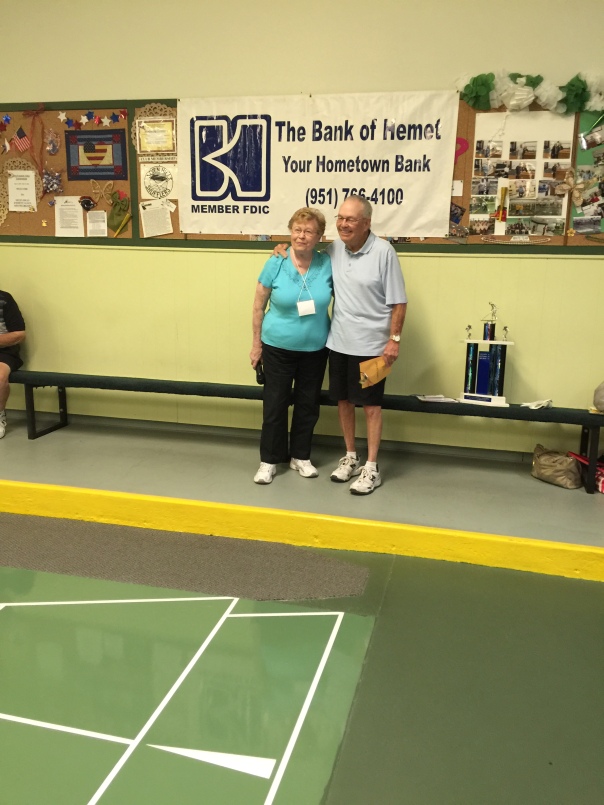 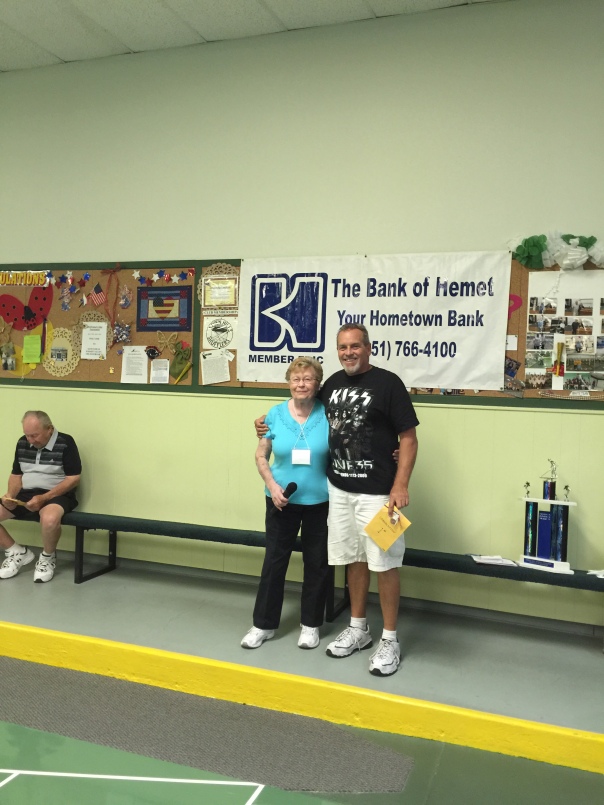 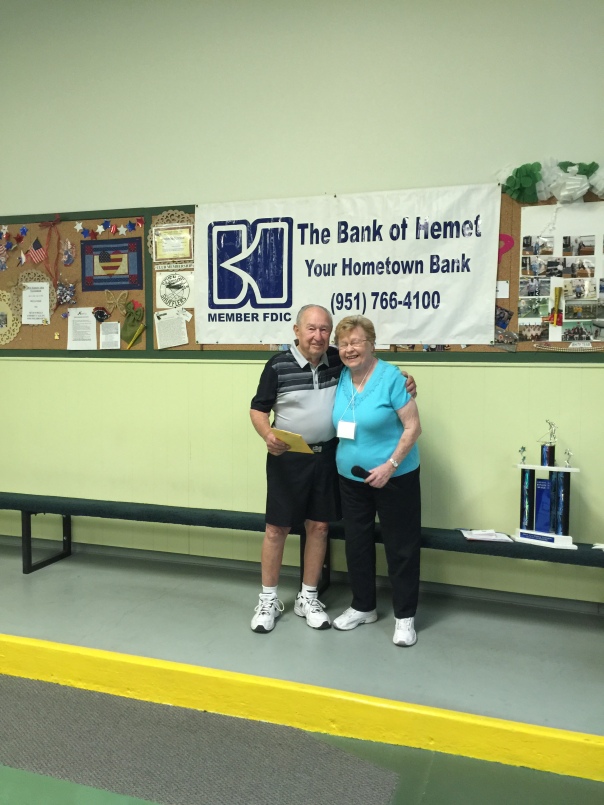 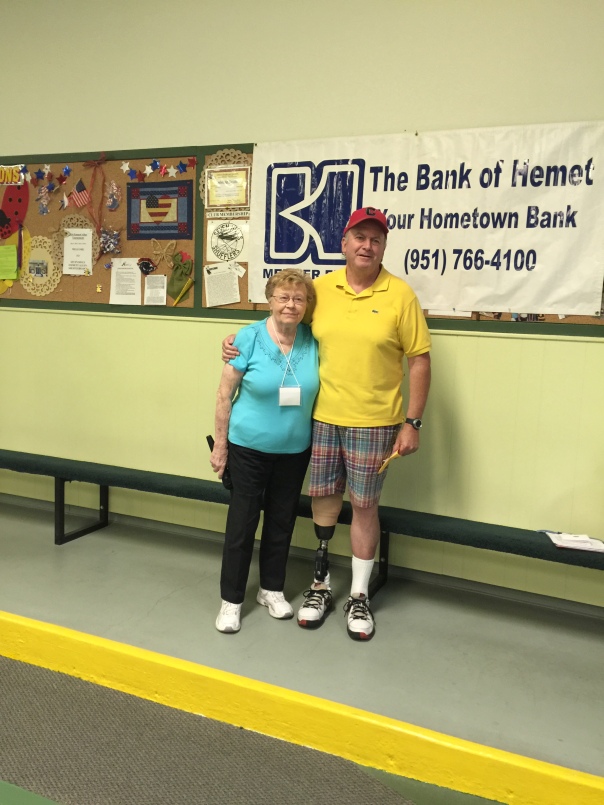 and fourth, Harry Gregory Why did Mary keep her distance? 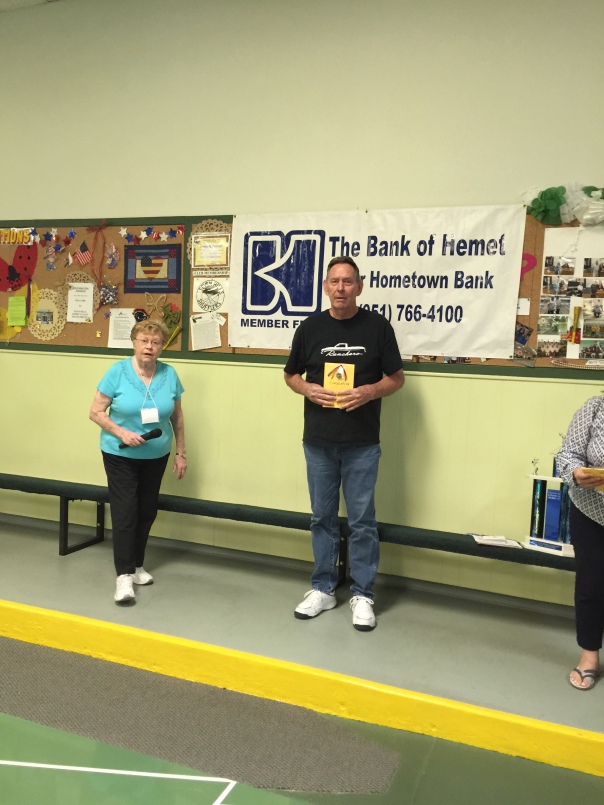 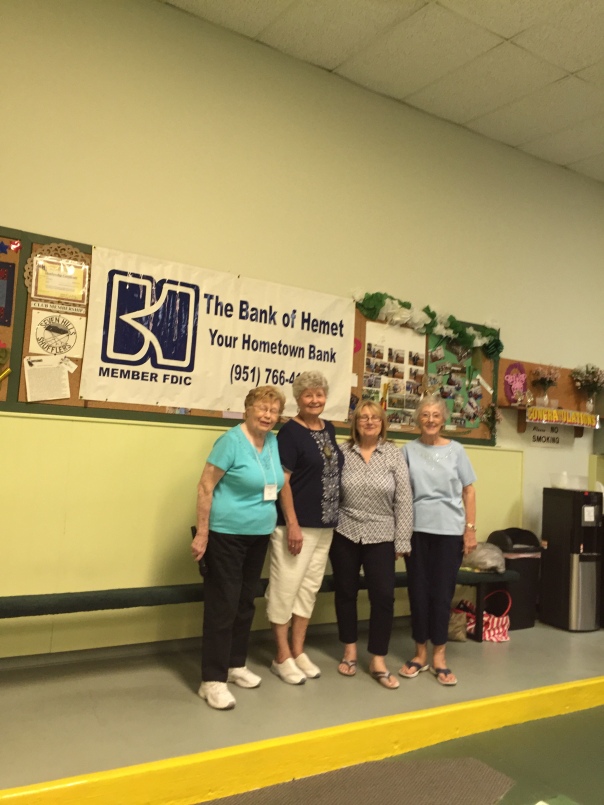 This narration would not be complete without a big THANK YOU to all participants.