by Dean Grattidge, District 7 Reporter
From Aug. 1-4, a nice turnout of 92 players converge on Hemet West Club to vie for honors in a CSA  Any Doubles Tournament.
ATM’s at the helm were Sharyn DiChiro and Jeannie Gregory. Fine job ladies of putting all the pieces together and carrying it through to the end! Paul Epps and Ken Norris maintained the boards in excellent order. Head ref was Dennis Iszler, as Karla Winget took care of the scorekeeping.
A big THANK YOU goes out to so many contributors. Those who donated gift certificates were: Steer ‘n Stein Restaurant, The Sizzler, Chile’s Restaurant, Penneys Department Store, Subway Sandwiches, Sweet Baby Jane’s Barbecue, and Hemet West.
Lunches were provided at modest cost for the first three days. I’m sorry I missed out on these lunches along with wonderful choices in desserts. (I was back east). There was cheesecake and apple and banana cream pie. Thanks to Kerry Selway for providing data on this event.
There was one highlight when he laid his skills on the line and celebrated his first tournament victory: Congratulations, Scott Lundie. All games were 12-frame and followed CSA rules.

All participants commend the Valley’s front running financial leader for their generous funding of awards: The Bank of Hemet Vice President, Myrna Torres was the presenter as these “upscale competitors” stepped up to receive their pins and awards for their efforts –
Championship:
First place, Robert Brooks and Jay Davidson, 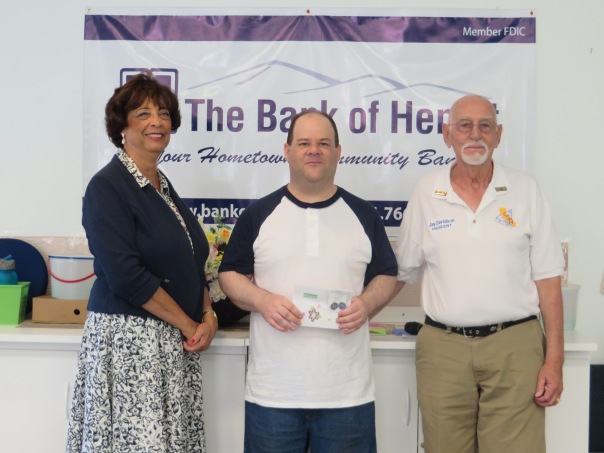 and fourth, Fran and George Hayner

.
Please mark your calendars for the next event: The Maxine Trachel Memorial singles tournament at
SDSE August 22-25.