Thanks to D5 Secretary Shirley Eager for this article.

When the Safari Shuffleboard Club, located in Palm Springs, decided to no longer host the annual District 5 Cash Bonspiel, the Indian Wells Shuffleboard Club discussed the advantages and disadvantages of trying to take on this project. No other club in the District was interested, so in order for the Bonspiel to continue, the Indian Wells Shuffleboard Club decided to be the host of this 4-day tournament. Since all of the entry fees go back into the purse to be paid out, the only way the Club could make some money was to sell tickets on an Opportunity Drawing each day and man (woman) the kitchen for 4 days.  And that they did under the guidance of Louise Bryant.

The 64 players from 8 of the 11 clubs that represent District 5, played 2 games on Friday. The results of those 2 games determined the division the players would play in on Saturday & Sunday. Each of those days, the players competed in 2 games. The top 4 scoring players in each of the 4 divisions played in the final 2 games on Monday. Game points determined the top 4 players with ties being determined by spread points.

Over the 4 days, Shirley Eager, ATM, reported 104 games were played on the Indian Wells’ 4 shuffleboard courts. The Board crew, led by Gene Eager, who also was the Head Referee, had the boards in excellent condition and were able to do a turn around on the boards in less than 6 minutes which kept the games close to being on time. 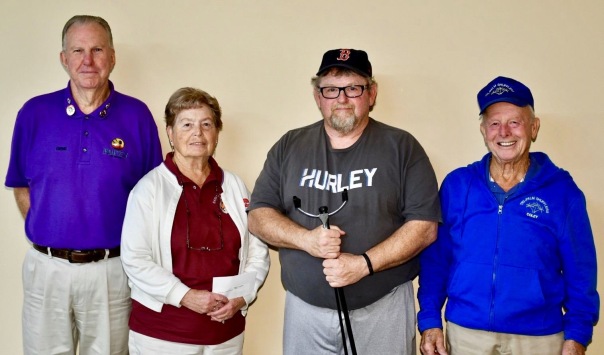 A District 5 tournament had never been held at Indian Wells RV Resort but the small but mighty Indian Wells Shuffleboard Club pulled it off.