Hosted by Howard Drake, with ATM’s Lynda Goggin and Helen Noeltner, the board crew had things ready for play at 8:30 Monday for the 40 teams of hopefuls. George Hayner handled the Head Referee duties and Carol Anderson and Carol Blasingame oversaw the scorekeepers and passed out the Karla Winget candy. The lunch ladies served pulled pork, chicken, hot dogs, sloppy joe sandwiches along with salads, chips, drinks and deserts. For some the lunches were the best part of the day.

For the other 8 teams that made it to the money rounds on Thursday, the games were hard fought. It seemed the boards yielded more 10’s than usual but kitchens were also easy to come by.

The winners posed for pictures under the banner of the tournament sponsor. Many thanks to The Bank of Hemet for their continuing support of District 7 shuffleboard. 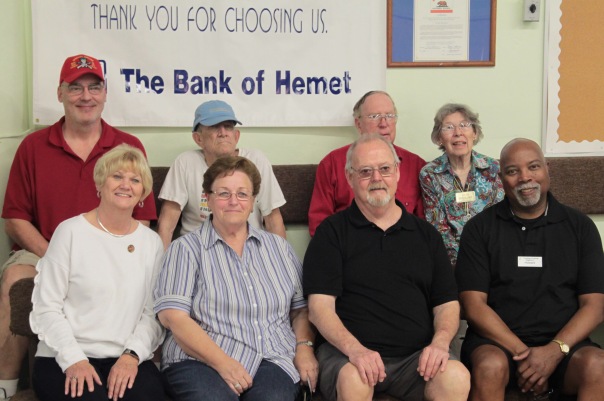 The Nielsen’s and Bill Rindone came over to play from District 5. Congratulations to them and all the winners. And thanks to all those who volunteered and gave their time to this fine tournament.

If you weren’t successful here, try again at the CSA Singles, hosted by the Sun City club on May 6th.